Greece is incredibly rich in its beauties,

because it is not by chance that so many civilizations were born here.

Start your journey now
or just make a first step.

Meteora Greece - a trip with a private tour guide

A day tour to Meteora,  is one of the most striking trips you would ever have. This wonder is about naturally created sheer rocks and manmade medieval Orthodox monasteries on top of them.

We have been specializing in excursion trips all around Greece for already more than 7 years and of course the most spectacular one is the trip to Meteora. You can visit "flying monasteries" of Meteora from Thessaloniki , Chalkidiki, Platamonas, Kalambaka, Athens, Pieria, etc.

If you want to get satisfied and fulfilled with bright images, nature sounds and mountain beauties, this one of the kind unique place - Meteora, must be visited only on a private tour.

How long does it takes to Meteora

A trip to Meteora will take:

Today there are 6 monasteries of Meteora open for visit and several more sketes. This is one of the most popular tourist destinations in Greece. All the way to Meteora itself is also very exciting, because in a couple of hours you move through several climatic zones and see with your own eyes both: the life-giving breath of the sea and the hot dry winds that carry away all the greenery of vegetation.

On the way, we can see beautiful places that are also worth seeing, so short pitstops can be included on our way. Here is a list of sight-attractions that are on the way and worth seeing:

Due to time limits, we will decide together what to see and where to stop while we are moving to our destination.

Meteora is the most mysterious place on Earth.

"Medieval monasteries are located on sheer stone pillars up to 700m high."

The very first monastery was built around 1350 (the Transfiguration of Christ). It is worth clarifying that first hermits appeared here in the 9th century. In its best of times, there were up to 3,000 people living in these bizarre rocks, and pilgrims came here from all over the world to communicate with living saints. They stopped to overnight at an inn exactly where the monastery of St. Stefan is now. Ascetics were striving for spiritual wealth and reached the truth through events and phenomena that were invisible to ordinary mortal people.

What we will see/visit? (Detailed description of the excursion tour in Meteora):

If you want to get 100% of impressions from visiting one of the most unusual and unique places on our planet, as well as to feel the peculiarity of the way of life of ascetics, the inhabitants of these inaccessible, steep, stone pillars, it is worth paying attention to visiting the smallest monasteries that are not affected by time and crowds of noisy tourists.

Before you visit monasteries, it would be perfect for better understanding of history and geology of this place, to visit some hidden from the crowds places, like hermits caves and hermits nests, where people was living, till few centuries ago. Actually, this is the place where all things have started here.
First, there was few people, with strong will and faith, living in local caves. When things gone bad, due to robbers and atrocities from strangers, hermits, found a way to climb up on vertical rocks and build a cell.
It is very difficult to live 20-30 meters (100 Ft.) from ground, going up and down for food, wood and water supplies. However, it was the only way to keep yourself safe, without fighting and killing, or without being slaved or killed. 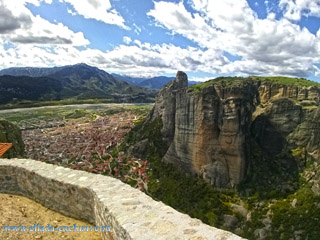 It is worth visiting one of the smallest monasteries on our way. Well-preserved murals (wall paintings) from the 16th century take the visitor back to the era when the monastery could only be reached by a ladder made of rope or wooden pieces. There are never many people here.

Besides that, this monastery is better to visit, because here we have less interfere and more original conditions, authentic way of monks life.

Having risen to the height of the clouds where the monastery is located, we begin to understand what difficulties the ascetic monks conscientiously faced. They needed more than 25 years just to raise the building stones and other materials to this height. History is silent about the way the first people got on a height of 619m, there are some sources that say the monks could fly. There is simply no other way to overcome a sheer wall with such a slope, because it was the time far before mountaineering and everything connected with it. 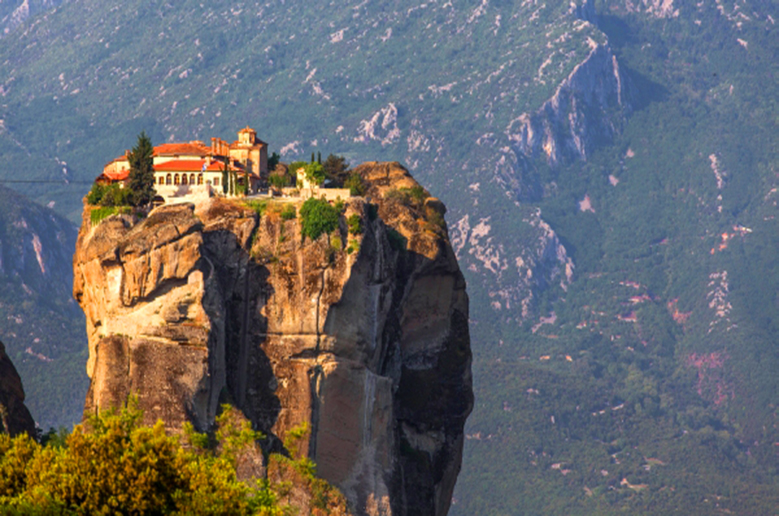 Here the monks were able to keep untouched both their faith and the relics of Orthodoxy.

Peace and tranquility always rule in sky-high monasteries, perhaps this is because the monks are constantly praying for the salvation of the souls of all sinners in the cells a couple of meters away from you, so you should not speak loudly in these holy places, in which service liturgies have been conducted for almost 700 years unstopable, every single day.

Also, you are kindly asked to show indulgence to believers whose tears begin to flow in the consecrated temples as soon as they feel the holiness of the place.

Sincere regret is not a transitional stage in the life of a monk or a temporary stage, but a state that continues forever. It is a second birth for a true believer who has chosen this difficult path. Fasting, prayers, night services are only a tool in the life of an ascetic. All this is done by a monk to get closer to the Holy Spirit.

After visiting monasteries you should go to the panoramic points hidden between the stone pillars, which show you a breathtaking view of this unique place. Meteora is one of the wonders of the World, which you cannot find anywhere else, and which is in the bucket list of everyone who wants to know all the mysterious places of our planet and find balance of soul.

Of course, there are some hidden places, which most of the visitors are usually missing, as a result, they pushing away other visitors, trying to take some photos, on common viewpoints.

Our goal is to get you close to nature and unique rock relief, as much as with cultural part of that place.

There is one of the largest and most famous icon-painting workshops in Meteora, where the Specialists in icon painting will gladly tell you about the secrets of icon painting in English, Italian, Polish, Russian, Czech, Romanian, Spanish and many other lunguages, show you the process, and even give you the opportunity to participate in the gilding of the icon. The icon painter starts painting the icon only after a long fast. According to the Orthodox custom of the Greek Church, the icons are illuminated in one of the holy temples for 40 days.

I am sure that visiting these places will leave the warmest and most vivid impressions. On the way to the excursion tour to Meteora, we will visit a lot of other magnificent places and sights. Ready to help you with answers to any questions! Contact me to get more details!

Comments and reviews about tour in Meteora & other places:

More popular tours in this region: 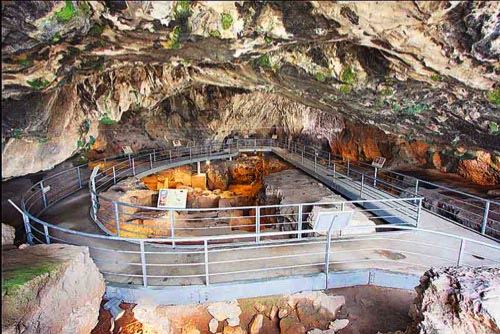 God's rock cave - one of the world most ancient.

Not far from the city of Trikala there is a mountain in a strange shape. Locals call this mountain the Stone of God. The most interesting thing about this mountain is the cave. This is one of the oldest caves in the world that man has ever inhabited. 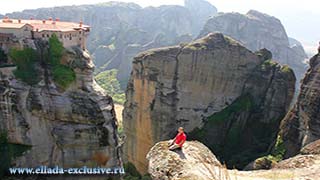 The excursion to Meteora mysteriously remains an unforgettable and the brightest trip in the mind of any traveler who has visited these places at least once. The high stone pillars of several hundred meters, on top of which, between heaven and earth, the eternal Orthodox monasteries once built, just amaze the imagination of tourists. One of the unsolved mysteries to this day is not only the origin, but also the absence of any mention of the existence of these stone pillars before the 9th century AD. In other words, nobody mentioned about the existence of these strange shape sheer rocks, during ancient times, like they never existed. And we talking about Greece here, the place where history as science was created, country with thousands remarks and reviews from ancient travelers, scientists, geography observers, etc. 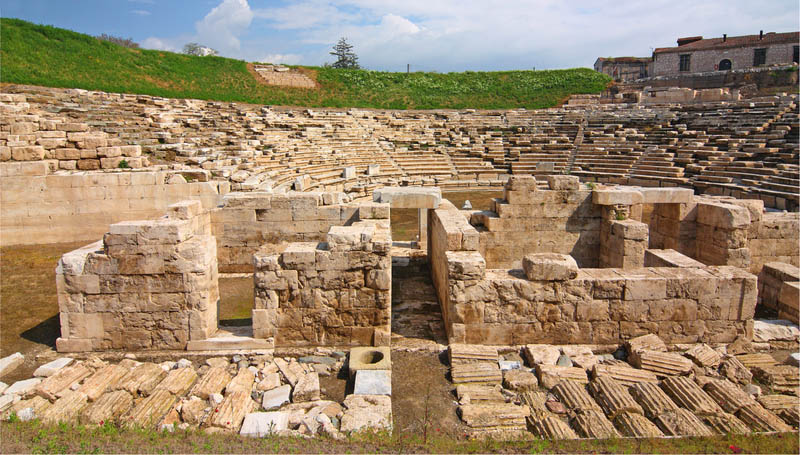 Larissa is the oldest living city on the planet with 8,000 years of history.

Here modernity and Antiquity miraculously harmonize. Antiquity smoothly passes into the Empire of the Romans - Byzantium. The times of the Ottoman Empire are next to the era of the Trojan War. In the center of the city, there is a beautifully preserved antique theater of the III-IV century BC for up to 10,000 spectators. The ancient doctor Hippocrates lived and worked here. The ancient author of the Description of Hellas, Pausanias, places Larissa in the first row of Greek cities, following Homer."